This year, we’ve already experienced the “wolf moon,” the “snow moon” and even the “pink moon,” but the next moon may be the tastiest one yet.

Taco Bell recently announced its plans to take over the night sky on May 4 during the crescent moon phase with its very own “taco moon.”

“On May 4, the world’s largest and brightest object in the night sky will resemble a favorite indulgence, the taco — a new lunar phase* we are affectionately calling the ‘Taco Moon,'” the company shared in a statement. 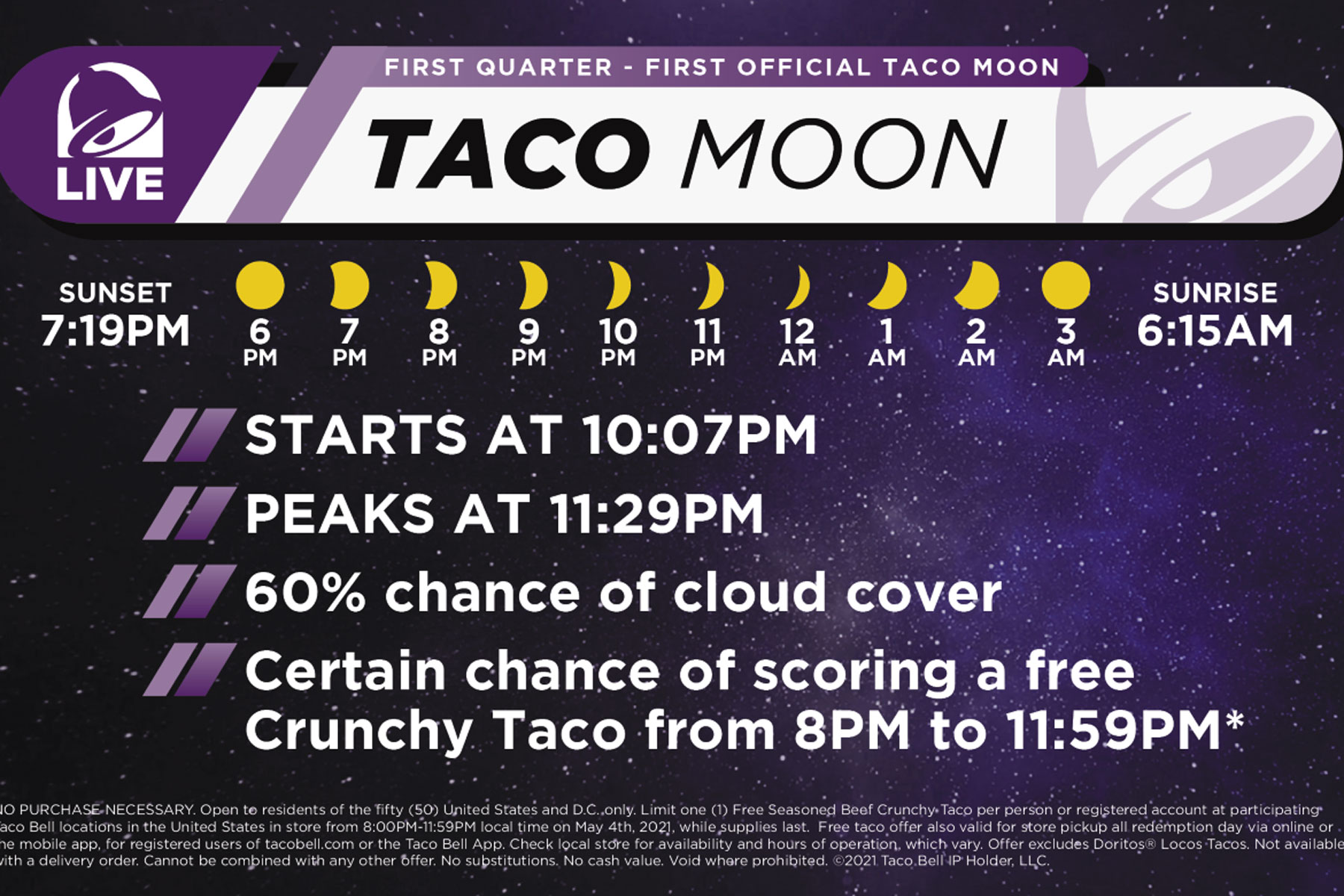 It added that important asterisk to note while Taco Bell “does not claim to own copyrights to a lunar phase of the moon,” it “stands behind the fact this really does look like a Taco Bell taco.”

And, when the Taco Moon arrives on May 4, hungry fans in the U.S. craving a treat can score a free Crunchy Taco between 8-11:59 p.m. in-store or all day through the app or online.

But, Americans aren’t the only ones who can score a freebie. Some international locations are getting in on the action, too.

“Taco Bell has been an established brand in the U.S. for nearly 60 years and we are thrilled by the accelerating fandom we’re seeing globally,” Julie Felss Masino, president of Taco Bell, International, shared. “As we’re opening more and more restaurants internationally, we know the May 4 moon will take us to new ‘heights’ as we introduce ourselves to new future fans in a delicious way.”

Participating Taco Bell restaurants include some locations in the United Kingdom, Australia, India, Costa Rica, Guatemala, and Puerto Rico, however, in those markets, guests will get a local favorite like a free Crunchy Taco with the purchase of a beverage in Guatemala and the option of a free black bean or seasoned chicken Crunchy Taco in India.

Can’t get to a Taco Bell on the night of May 4? Those in the U.S. will have the chance to score two additional offers all day on May 4 and May 5. Both offers, Taco Bell explains, are fully customizable, available online and for delivery. And, Taco Bell Rewards beta members get bonus points on either promo, making it a win-win.

Visit TacoBell.com/TacoMoon for more information on how you can score more delicious deals.